The song says ‘What a difference a day makes’ – sometimes it takes much more than a day to see real change or to recognise it..

I first visited Santa Maria de Jesus in early 2001 … Eleven years on I can really see a difference… Let me give you a couple of examples.. 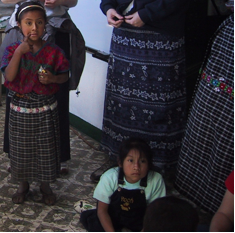 This was Blanky in FEBRUARY 2001 – she was sitting on the floor at everyone’s feet when I first met her, she had been carried into school and had no way of getting around. 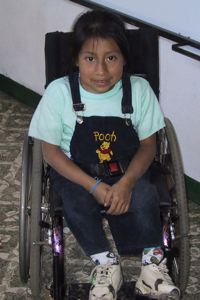 I was able to provide her with her first wheelchair – that was a special day! 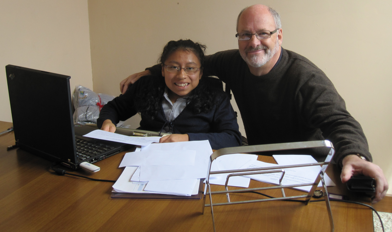 This is Blanky in MARCH 2012 – she has gone through school, graduated and then completed a bookkeeping course in Guatemala City and has come back to the school to be appointed as the school secretary! She really looks the part and is doing a tremendous job..

In FEBRUARY 2001 there were 8 students meeting in a small single story building that was not really suitable as a school. 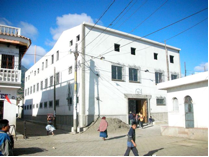 Today there is a three storey purpose built building and there are almost 100 pupils of varying needs and levels of disability. The building and the school have become a symbol of hope in a very needy ‘village’ of some 25000 people.

We have been privileged to be a part of what has been happening – our first real project was when a request came in to help finish the third floor of the new school. We were excited to be able to provide the $15000 needed to do the job.

Our next big project was when we were able, with the help of a number of others, to fund an Occupational Therapist, Maria Larkin, to go from Ireland to work at the school for a year – she did a wonderful job and is still talked about with affection!

The New Life with Education school continues to provide daily for the needs of the vulnerable children of Santa Maria de Jesus – food for their bodies with a good meal each day, food for their minds with an excellent standard of education and food for their souls with guidance and direction in spiritual matters. 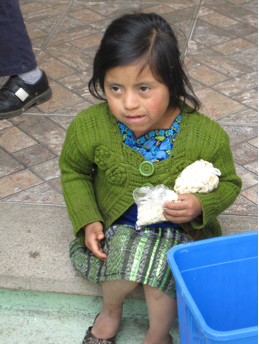 Our involvement continues – The 2012 SENSORY ROOM PROJECT is well under way.

As most of you know, I spent 5 days in early March in Guatemala and am able to report the following:

1. Equipment for the sensory room has now all arrived in Santa Maria de Jesus. I had taken some with me on my last visit in August and the rest was shipped direct from our supplier in The Netherlands. I spent almost two days of my visit working on getting the shipment through customs – thankfully after a lot of talking at numerous offices we have managed to get everything through safely and intact! No small feat in a country where the amount of duty might be determined by how the official is feeling on the day and the possibility of theft is high! The cost of this equipment including shipping and duties etc was in the region of £7500.00.

2. I also spent time with the carpenter who will be doing most of the installation work. It was good to be able to explain our plans for the room with the help of Amy as interpreter and my pigeon Spanish! We have agreed a cost of approximately £2000.00 which will cover all his work and the materials involved.

3. Work is expected to start by the end of April so we are looking forward to some exciting photographs some time after that.. This does not finish our project – I have promised to prepare teaching materials on the use of the room which Amy will translate. The plan is to employ a suitable person to run the room after training. I have not as yet committed us to funding this person but would dearly like to at least be able to underwrite her cost for a year or so if we manage to get some further help from outside sources.

4. As you can see from the figures above, the total cost of the sensory room is in the region of £10000.00 – we are delighted with this figure as it will give them a room and equipment that would be costing at least £20000.00 here at home!

5. As you know Moorings has underwritten this project but we are most encouraged to have had donations from a variety of sources which has helped enormously. With what Moorings has in hand and what we have pledged over the next few weeks, I estimate that if we managed to get further gifts of say £4000 that would also allow us to fund the person to run the room!

6. As usual when I visit Guatemala I see more work to be done and this time was no exception – there were at least two, but more likely five, children either in the school or associated with it that were obvious candidates for using the new Buddy Roamer™ walker that Moorings is now manufacturing so I am working towards making this happen also!

We have a number of component parts that were used for demonstration or were in some slight way not usable in units that we were selling and I have pulled those together and have already spoken to one of our parts suppliers who has agreed to add, free of charge, to our next order enough of the ‘bits’ that they make for five units.

I am in the process of speaking to some more suppliers to beg for the rest of the parts and our aim is to be able to build and then ship some Buddy Roamer™ units to the US where they will be loaded into a container that will make its way to Guatemala. We are looking forward to a day not too far distant when we can have photos on the Buddy Roamer™ website showing some kids using walkers in the streets of Santa Maria!

Firstly – thanks to those of you who have in one way or another partnered with us and with the New Life with Education School. It has been a very worthwhile investment!

Secondly – if you have considered getting involved before but up until now have not, think again.. you could help make a difference! As I said it doesn’t all happen in a day but it does happen.